The difference between turmeric and ginger examines their distinct features, being two of the most considerably studied ingredients in herbal medicine. Ginger (Zingiber officinale) is a plant that has been used for centuries as a natural treatment for various health problems such as digestive disorders, particularly nausea and diarrhea. The primary pharmacological effects of ginger are due to its active constituents gingerol, Shogaol, and Zerumbone. Among the three, gingerol is considered to have the most potent anti-inflammatory and antioxidant qualities.

Turmeric (Curcuma longa) is commonly used in Indian cuisine and is widely cultivated in Asia, India, and China. It has three active major curcuminoids: curcumin, demethoxycurcumin, and bisdemethoxycurcumin. The chemical compound curcumin is found to aid in treating and preventing inflammation and various chronic diseases. The curcumin content of turmeric is about three percent of its weight.

What Are The Health Benefit Differences Between Turmeric And Ginger? 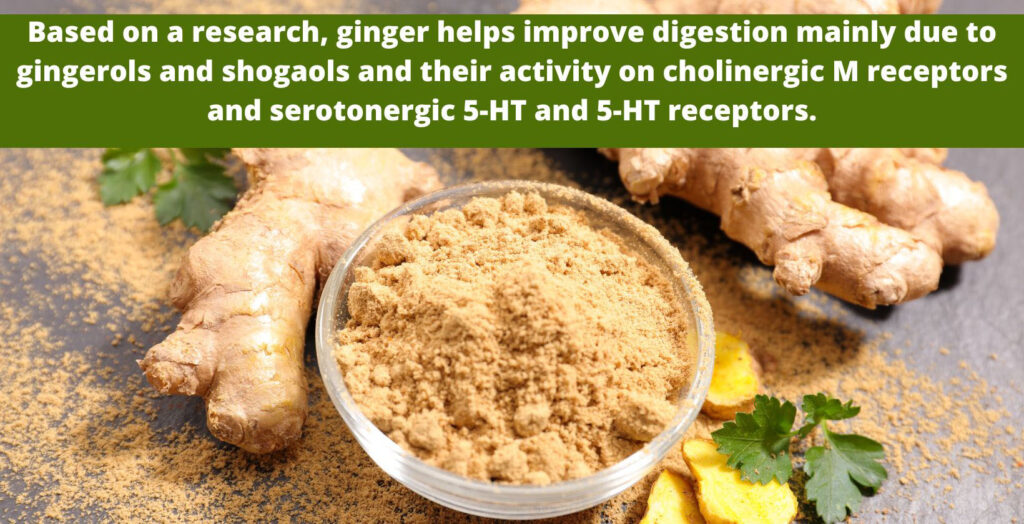 What Are The Nutritional Differences Between Turmeric And Ginger?

Turmeric contains more than 300 natural components while ginger comprises over 400 different compounds. The following are the nutritional profiles for a 100 gram serving of turmeric and ginger based on the U.S. Department of Agriculture (USDA) website.

What Are The Cultivation Differences Between Ginger And Turmeric?

The cultivation of ginger is believed to have originated in India and China. It now spreads throughout the tropical and subtropical regions in both hemispheres. Ginger thrives in warm, damp climates with plenty of light, including 2 to 5 hours of direct sunlight. Do not allow the plants to dry out while they are actively growing. As the weather cools, reduce watering, which will encourage the plants to form underground rhizomes. The most suitable time to harvest ginger is when the plant is 8 to 10 months old.

India is the largest producer of ginger. According to the Research and Market website, the global ginger market is anticipated to attain US$ 8.46 billion by the end of 2027. It is expected to grow with a CAGR (compound annual growth rate) of 3.13% from 2021 to 2027.
Turmeric is a typical spice used in preparing curries in India and other Asian countries because of its flavor and color. It originated from India and is currently grown in several parts of the world, including Southeast Asia, China, and Latin America. Turmeric is widely cultivated in tropical areas, but it is relatively easy to grow in colder climates. You can grow it in the garden during the summer, then dig the rhizomes up in autumn. Turmeric tolerates wet soil but doesn’t do well in full sun, preferring morning or filtered sun only.

India is the largest producer and leading turmeric exporter. According to Grand View Research, the global turmeric market was estimated at ~1.7 million metric tons. It was expected to increase significantly by 2027. The curcumin global market was estimated to be around half a billion US dollars in 2016 and is projected to report a compound annual growth rate (CAGR) of 13% throughout 2018–2025.

What Are The Recipe Differences Between Ginger And Turmeric?

The herb ginger is commonly used in baking, such as gingerbread, biscuits, cakes, puddings, including soups and pickles. It is naturally spicy, peppery, and sharp, but it doesn’t overpower a delicious soup when added to it. At the same time, turmeric powder is used in mustard paste and curry powder to give color and aroma. The taste is earthy and mild and hides a bitter undertone.

Let’s take a look at the differences in the recipes between ginger and turmeric.

What Are The Supplement Differences Between Ginger And Turmeric?

Ginger and turmeric are both consumed orally and are available in various forms to meet the needs of every customer. Some of the turmeric and ginger supplements below come in herbal tinctures and vegetable capsule forms.

Pure Encapsulations Curcumin with Bioperine is a hypoallergenic supplement that serves a range of dietary requirements. There is no gluten, egg, peanuts, wheat, and genetically modified organisms (GMOs) in this product. It contains turmeric extract, standardized to contain 95% curcuminoids and Bioperine from black pepper for enhanced absorption in the body.

Innate Response- Turmeric Response Joint supplement helps healthy inflammatory response for the joints. It contains turmeric root extract, standardized to contain 95% curcuminoids. Aside from turmeric, extracts from Indian frankincense, devil’s claw, and ginger are also present in each capsule. Turmeric’s absorption in the body is improved through the inclusion of Bioperine in this supplement.

Consider using Karuna Health’s Ginger-B6 if you’re looking for a supplement to help your gastrointestinal system function properly. The ginger extract in this capsule may help relieve symptoms of indigestion‚ diarrhea‚ and constipation, among other benefits. Each capsule provides vitamin B6 and 250 milligrams of ginger root extract.

Gaia Herbs Ginger Root is a certified organic extract made to help relieve occasional nausea and upset stomach. The liquid extract is USDA certified organic to ensure that it is made without synthetic fertilizers, prohibited pesticides, or genetically modified organisms. Each serving contains 0.67 ml (20 drops) of ginger root extract and is an excellent aid for those times when you occasionally overindulge.

Where To Buy Ginger And Turmeric?

You will find ginger and turmeric supplements at the store in the spice section or with other herbal supplements. Also, you can buy them in your local pharmacy or online directly from their manufacturers and reliable retailers like Premier Formulas. It is crucial to buy from trusted manufacturers that follow Good Manufacturing Practices (GMPs) to ensure the safety and quality of your supplements.

Which Root Is Better, Ginger Root Or Turmeric Root?

Turmeric and ginger are both rhizomes with anti-inflammatory effects and high levels of essential minerals. Ginger is high in bioactive components and nutrients beneficial for the brain and body. Gingerol, a component in ginger, has potent medicinal properties. It has modest amounts of magnesium, vitamin C and B6, copper, phosphorus, iron, and zinc. Turmeric is high in iron, manganese and vitamin B6, dietary fiber, copper, and potassium. The main active component of turmeric is curcumin, which has medical qualities. It has powerful anti-inflammatory effects and boosts the body’s antioxidant capacity dramatically.
Benefits Of Ginger: 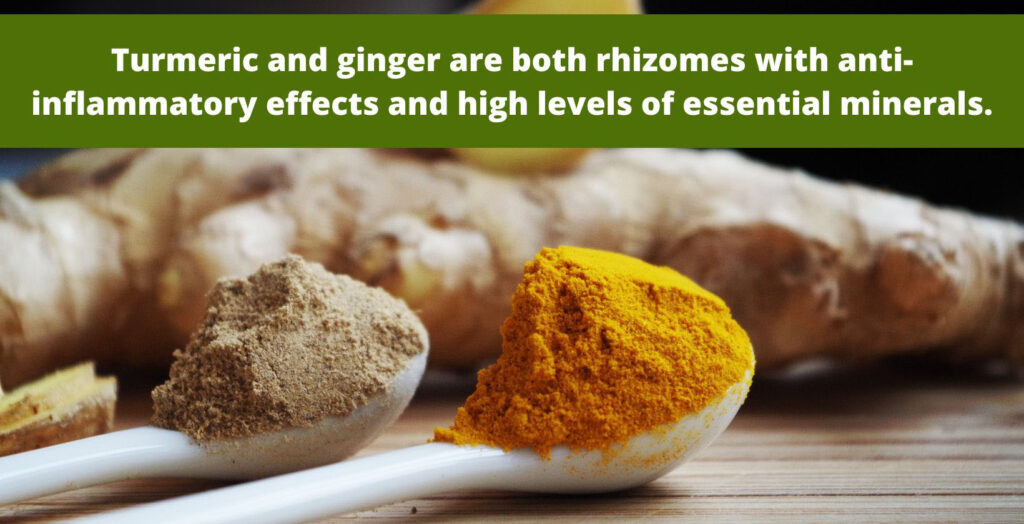 Can You Eat Turmeric And Ginger Together?

Yes, you can eat turmeric and ginger together. They’re wonderful together in dressings, stir-fries, curries, stews, teas, and other various dishes. They offer a burst of taste and health advantages to your favorite meals and make delicious, tangy additions to smoothies and juices. A daily supplement combination that combines turmeric and ginger is also available to consumers.

However, the combination of the two has not yet been studied extensively in humans. Most of the available research is confined to test-tube studies. Nonetheless, they can be a part of a healthy diet and consumed safely with little risk of adverse health effects.

What Are The Anti-Inflammatory Differences Between Ginger and Turmeric?

Ginger and turmeric, on their own, have powerful anti-inflammatory effects. Gingerol, a component of ginger, has been revealed to help with various inflammatory ailments, from the common cold to inflammatory bowel disease. Turmeric, like its relative, is no exception. Curcumin has a similar anti-inflammatory power. According to research, curcumin was just as effective at reducing OA (osteoarthritis) pain and inflammation compared to nonsteroidal anti-inflammatory drugs (NSAIDs) such as diclofenac and ibuprofen based on a systematic review led by Dr. Daily and published in the Journal of Medicine Food.

What Are The Side-Effect Differences Between Ginger and Turmeric?

Ginger and turmeric are both considered safe and healthy additions to a balanced diet when used in moderation. However, when consumed in high doses, potential side effects occur. Ginger may reduce blood clotting and could intervene with blood thinners. Accordingly, it may impact blood sugar levels. Therefore, it is advised to consult with a healthcare provider before taking ginger supplements when taking maintenance drugs.

Curcumin has been linked to adverse effects, including rashes, headaches, and diarrhea in high dosages. Turmeric is high in oxalate, a chemical that is excreted through the urine. In high doses, excess oxalate can combine with calcium and increase the risk of kidney stones based on a study by Dr. Tang, M. et al. and published in The American Journal of Clinical Nutrition. In addition, pregnant women should not take turmeric supplements because of their blood-thinning properties, as this may stimulate contractions. Adding small amounts of turmeric to meals should not have any adverse effects.